You’re not alone, there is a whole network of NKH families who are in the exact same position you are right now. Get in touch.

You can find more information about NKH at The Foundation for NKH.

Get help if you’re in crisis. If you are new to NKH and need to talk to someone urgently these are numbers of some NKH parents across the globe who will be happy to take your call. Please try to call the location within your time zone, but of course if its the middle of the night where you are and you need to talk to someone, another time zone may be more appropriate. 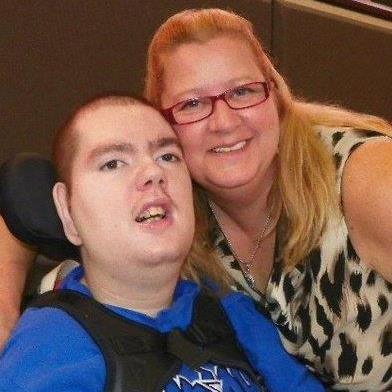 In 1990 Mary Lou Chandler gave birth to a beautiful baby boy. Jamie was diagnosed with Nonketotic Hyperglycinemia. The prognosis was grim: “He’ll live 6 months to 1 year, he’ll start having seizures and then he will die. There are no other children living with this terrible disorder.”

The doctors gave her a PARAGRAPH about the disorder and sent them home to say goodbye. When Jaime was 3 years old and was still alive and well (despite the dozens of trips in and out of the hospital) Mary Lou started searching for other families.

While at a doctor’s appointment Mary Loud flipping through an “Exceptional Parent” magazine found an article about a girl with Nonketotic Hyperglycinemia. They lived in Clearwater, Florida – only an hour away from where Mary Lou and Jamie!

Via the magazine, Mary Lou wrote to Karen Carter which led to their first phone call and visits. They regularly kept in touch. It was clear there was no support group for Nonketotic Hyperglycinemia and no way for families to find each other. So they created one.

NKH International Family Network (NKHIFN) was born in 1995. The number of families grew and grew, and with the help of NKH parents like Debbie Taylor, Judy Clifford and Charlotte Underwood – NKHIFN has been growing ever since.

We continue to grow – from a handful of families we now have 300+ in our network around the world.

There are 100+ families living with Nonketotic Hyperglycineamia around the world. We support every family who needs us, particularly the newly diagnosed.

You’re not alone, we’re here with you.